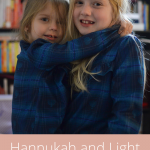 Hannukah started this week. It feels like a beacon of hope and light in this traumatic year.

I’ve struggled with the words to say here for most of 2020. Following my layoff in March, I fell into a depression and fought it all year. I’m still fighting it, and I don’t expect that to change for some time. Some days I feel incredibly strong, and others have tough moments.

But back to Hannukah.

I don’t typically make a big deal out of Hannukah. As an interfaith household, Christmas takes up most of our brainpower this time of year – the tree, the presents, the lights, Santa, the cookies – even my Jewish mom embraced my dad’s Christmas traditions when I was a kid. I embraced them as an adult, finding them fun and joyful, and finding a bit of comfort in being just like everyone else for once.

But this year, throughout all its pain, has brought me something I’ve been searching for– a stronger connection to Judaism.

It started in the spring when I started to bake challah for the first time. The ritual of kneading and braiding the bread stirred something in me, and it became a weekly tradition by the time summer hit. In late summer, I started lighting candles on Shabbat, something I had never thought to do. I am still touched by the little bit of comfort that brings my soul each week and hated the week I forgot to buy more candles. It didn’t happen again.

When Rosh Hashanah arrived, I had just started a new job thanks to a connection with friend and a chance Facebook post, posted out of frustration. It was such a relief to enter 5781, knowing the work was not over, but that I could leave so much of the grief and frustrations of 5780 in the past. I don’t know that I’ve ever had as strong of a connection with the end of a Jewish year before.

On Yom Kippur, I thought of everything the year before had been and truly mourned it. In my private confidences I asked for the strength to face the coming year with humility and love. I thought of all I had wronged and tried to forgive those who had wronged me – an exercise that was harder than usual. I promised to do everything I could for the good of myself, my family, and the world.

As I’ve wanted to do for years, I found small ways to get my kids – technically Jewish because of their Jewish mom, but growing up in an interfaith home – excited about their heritage. We baked round challah for Rosh Hashanah and ate sweets, made a doll-sized sukkah on Sukkot, and had real conversations about what I believe and what my husband believes. We talk now about how that is different and the same, and that they can choose what they believe.

And now, once again, we come back to Hannukah.

If you’re not Jewish, you may not know that it’s a minor holiday in the Jewish calendar, commercialized and popularized due to proximity to Christmas on the calendar. It’s one of the first Jewish stories I remember – the story of Judah and the Maccabees, and the oil that somehow burned for eight days instead of one.

I can’t help but think about that eight – eight days instead of one. I feel like it’s exactly where I am right now, and exactly where I’ve been. Eight months ago, things were hard, and I didn’t know how to get through the next month – but here I am. The strength for one month has somehow gotten me through eight.

On that same thought, I personally estimate we’ve got about eight months to go before things start to get a bit easier in this country (we all know vaccine distribution will likely go on through the summer). We’re all tired, and we maybe have strength for one more month. But what if that strength could last for eight?

I realize it’s an aspirational premise, the thought of attaching our real lives to an old story. The story is about a miracle, about keeping faith in dark times. I am choosing to have that inspire me for the next eight months. I am choosing to create my own miracle, to find my own light in the darkness, and hopefully pass that on to others. We create and crave light this time of year for a reason, in many faiths. We crave the light of gathering and hope, and of better times ahead. I have to believe they are coming – and that we need that small inspiration to get there.

“The proper response, as Hannukah teaches, is not to curse the darkness but to light a candle.” 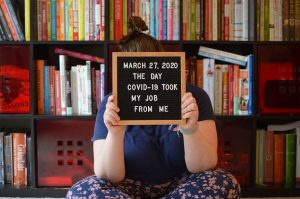 Laid off Due to COVID-19