Happy Thursday!  Today I’ve got another edition of the Sleep Chronicles for you.  I discovered Jenny’s blog pretty recently, and I’m so glad I did!  She’s a total sweetheart, and her little girl is adorable.  (Also, if you want to read a great post on being a one-child family, read this one.)  Enjoy! 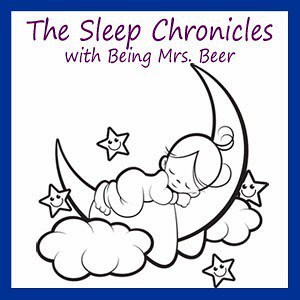 Hello! I’m Jenny and I’m a SAHM to an almost 21-month-old daughter named Caroline that we call Callie. I am honored to be able to share my story in Jess’s Sleep Chronicles series. I blog over at Growing Up Jacobson.  I mostly blog about Callie, since I started the blog to document her life, but I also blog about our family, weight-loss/running and life’s little adventures! 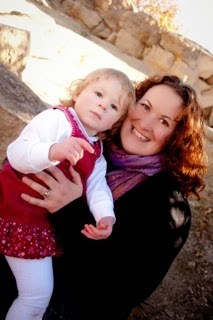 Sleep. Oh glorious sleep! I am the first to admit I like (need?) my sleep. I knew that the early days of a baby would be rough on that. It was also very important to me to breastfeed my daughter. I think I spent double the amount of time reading up on breastfeeding as I did sleep. The more I read the more I found opinions on how linked the two are for babies.

I should start out by saying that I am one of the fortunate ones and I have a good sleeper. It took us a little while to figure things out but once we did Callie has been a really good sleeper. She has always been better at night than at naps but overall really good. I am so beyond thankful for that.

Now that’s not to say we didn’t have our struggles and learning to do as new parents. The first six weeks weren’t so bad. We had a rough start (Birth Story & NICU stay) but once we were all home I fed Callie when she was hungry, around every three hours, and she slept when she needed to sleep. We had her last feeding of the “day” when we went to bed around 9/10pm. Callie slept in a pack-n-play with a bassinet in our room until about four weeks old when she came off oxygen. That very night we moved her to her crib in her room and she slept 6 hours straight the first night! It took a little longer to get naps in her crib but by three months old that was the only place she would sleep at all. 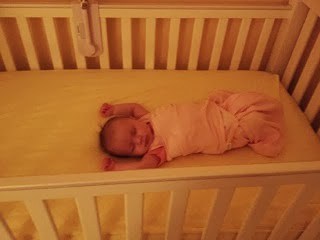 The period of weeks six through ten/twelve were just awful. Callie was still a pretty decent sleeper at night getting up about twice a night at that point. But the days, the days were AWFUL. She wouldn’t nap – at all. Maybe two 30 min naps total. Now I’ve “heard” that is normal for some babies but Callie was miserable as the day went on so I knew she wasn’t getting enough sleep. Callie has never been one to sleep much in the car, stroller or baby carrier. I really didn’t know what to do. Everyday I was so desperate grateful for bedtime because I knew we could both get some night sleep.

At Callie’s two-month check up I brought up her lack of napping, her mood and also her constant spit up with her doctor. The doctor believed it to be reflux and prescribed some medicine that she said often took about two weeks to fully kick in. It helped with the spit up right away but it did take the two weeks to see any other changes. Her mood improved some but she still wasn’t napping much. It’s also important to note that doctor said that letting her cry wasn’t a solution that she was much too young for that. So what was a new mama to do? We took the advice of our doctor and did whatever we could to try to get her to sleep and keep her from crying.

One night Callie woke four times and was a bare to even get back to sleep. The next morning was just as bad and I put a call into her doctor. We took her in and it turned out she had a double ear infection. We got her on antibiotics. This time we saw a different doctor in the practice that said the medicine should kick in within a day and to use Tylenol for the pain. The doctor was concerned about her sleep habits and said if she didn’t start sleeping better within a week to call back. This doctor also said there was no reason to not teach Callie how to self soothe; that she was plenty old enough. He just advised to give her a few days with the antibiotics before starting. 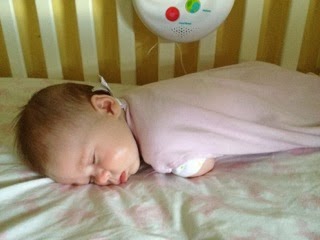 A few other things are mixed in around this time. I began treatment for my post-partum depression. We had stopped swaddling Callie (because she HATED it) and Callie started rolling over in both directions. Once she could roll over she would only sleep on her tummy. She still sleeps that way to this day!

A mom support group I had been in early on had suggested the book “Healthy Sleep Habits, Happy Child” by Marc Weissbluth. I had picked it up but only skimmed it. After talking to two neighbors who also swore by that book we tried again. At this point we had addressed Callie’s reflux and had treated her for an ear infection. We knew if she cried that she wasn’t sick so it was time to teach her to self soothe. 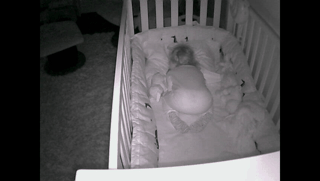 In took Callie awhile to get the hang of self-soothing to sleep. Callie was all for a pacifier for soothing but would spit it out as soon as I laid her down. So it didn’t help her get to sleep at this stage. I would try to go in and calm her down and give her back her pacifier but those “interventions” seemed to work her up more. So I stopped going in. At first it took an average of 20-25 minutes of crying (I never left her more than 30 minutes) for her to fall asleep for naps. Once she did? She was out for at least an hour if not 90 minutes! She started to get on a regular schedule of three naps. When I rocked Callie to sleep she would only sleep maybe 20-30 minutes.

Bedtime didn’t involve as much crying but Callie had shown early on to be a good night sleeper. It only took maybe 15 minutes of crying at first and the fussing at bedtime went away much faster than at naptime. In fact she still even cries at naptime on occasion these days. However I don’t even recall the last time she made a sound at bedtime. With putting herself to sleep Callie slept even better at night. By the time Callie was just over three months old she was only waking once a night (occasionally twice a night). Sleeping 7pm – 7am. Around six months she started sleeping through the night (10-11 hours) about half the time and by seven and half months she just slept through the night and hasn’t woken since. Now if she’s teething or sick she might wake and cry out for a minute but puts herself back to sleep before I can even get out of bed. I haven’t had to go into her room at night since she started sleeping through the night.

I feel like the sleep habits book is more of a guide and less black and white than anything else I’d read (I read babywise, the no-cry sleep solution and the Ferber book). I didn’t just let my daughter cry-it-out, I didn’t sleep train her, I taught her how to sleep and to self soothe. Maybe that’s all the same thing and it’s just some semantics, but for me it was a key distinction. I really liked how the Healthy Sleep Habits book gave you a lot of science behind sleep, talked about guidelines for babies at different ages but never said do x to make your child sleep. I liked being able to take the information and apply it to my child in a way that made sense for her. 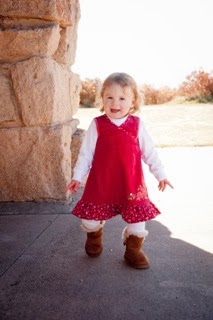 So what do I take from all this? Well first I don’t think there’s a perfect answer – just what works for your kid. In our case teaching Callie to self-soothe and put herself to sleep was what she needed to sleep better. She also didn’t want to be swaddled and slept on her tummy. I do think we received some bad advice in the beginning from her doctor and I’m glad we were able to move past that. I am glad that we figured out what our child and family needed and set aside the conflicting advice we were getting.

Thanks again Jess for letting me share our story!