Good Morning! I’m taking today to do a little update on this pregnancy – I promise not to overwhelm you with pregnancy posts, but I know some of you love these and I want to remember, so here we go! 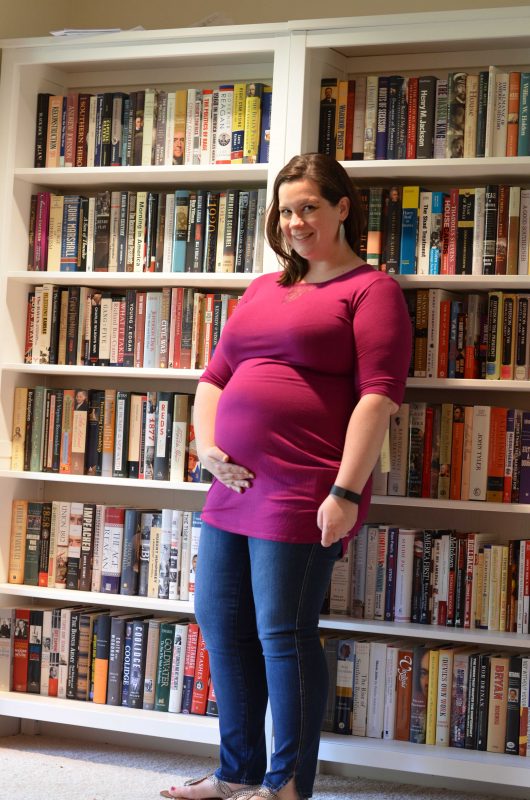 General Thoughts/Feelings/Mood: Excited but tired. I’m ready to feel pregnant… right now I feel about the same, just with some pudge. A little nervous about how Abbie’s going to handle everything.

Food Aversions: Everything? Nothing? Basically almost nothing tastes good, but nothing tastes bad either. I didn’t have this with Abbie so I don’t really know what to do with it. It’s just really strange.

Food Cravings: Chick-Fil-A Diet Lemonade, even better when topped with a little bit of Ginger Ale. Carbs. Anything intensely flavored (super sweet or super salty) because my tastebuds are just weird right now.

Health/Fitness: I gained about 10 pounds my first trimester – not good. I do sort of remember this happening with Abbie though – I gained the first trimester, held steady most of the second, and gained in the third. Since I’m already overweight, I’m supposed to only gain 11-20 pounds. With Abbie, I gained 34, and my personal goal is to just stay under that. I’m also making sure to keep up with my 10,000 steps every day for as long as I can, and I think that’s helping.

Doc Appointments: All good! I go to my OB every four weeks, and I also see my endocrinologist once a month to check my thyroid levels (I have Hashimoto’s disease so they have to be checked often). Everything looks good so far. The only thing really different from my last pregnancy is that I’m taking a baby aspirin daily to prevent preeclampsia since I developed it during labor with Abbie. I really would prefer to not deal with that again and have a smoother labor.

Sleep: Pretty good actually – I wake up about once a night to pee but fall back asleep pretty quickly.

Gender: We’ll know soon! Chris thinks girl, Abbie keeps saying sister, and my mom refuses to tell me her opinion because she doesn’t want to be wrong. At first I thought boy because I wanted cheeseburgers, but now all I want is carbs and my face is breaking out like crazy so that makes me think girl. Chinese gender chart says boy. I literally have no idea anymore.

Maternity Clothes: Oh, yes. The thing about second babies showing sooner is definitely true. I’m already in maternity pants, but I can still get away with non-maternity tops and dresses. I’m hoping it lasts a little while to allow me to build up a wardrobe!

Miss Anything? I could use a beer. That’s really it. This happened with Abbie too.

Baby Items Purchased: None! I’m not really going to buy anything until we know the gender.

Best Moments So Far: Telling our families – my mom’s reaction is something I’ll never forget. Long story short – I told her at 8 weeks and she was mad I didn’t tell her immediately. Typical Jewish mom.

Most Unexpected Moment So Far: Feeling baby move! It was definitely much later when I felt Abbie move, but I’ve already felt this little one moving around a little bit. I’m excited for it to get stronger and for Chris and Abbie to feel it!

Looking Forward To: Finding out baby’s gender! I did the Verify test by Progenity, so we’ll have those results soon. We’re probably going to keep it to ourselves and our families for a little bit before we tell the world though.

Abbie: I’m not really sure what she thinks of all this, but she has a lot of changes about to happen in the next 6 months. We started potty training yesterday (well, daycare did and we’re continuing at home). We’re starting to clean out the spare bedroom that will become hers and I’ve been scouring craigslist for furniture for her new room. She’s got all these new emotions and so much personality nowadays and is trying to figure out what to do with it. She understands that the baby is in my tummy… but I’m not really sure she knows what that means for her. I’m hoping as my belly grows and baby starts kicking, she’ll understand more… but you know three years olds. Unpredictable.