Well, the third trimester is here to stay! I can’t believe it sometimes – this little lady will be joining us in just about 3 months! 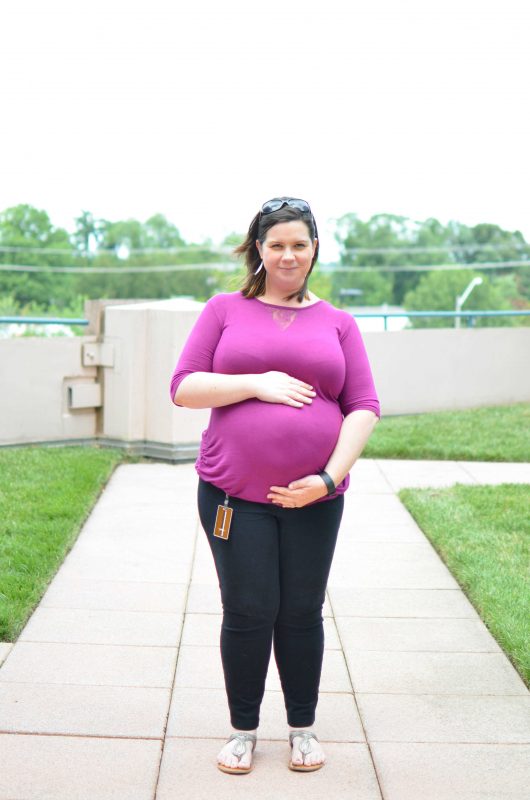 General Thoughts/Feelings/Mood: I generally feel okay. I’m starting to swell a little bit at the end of the day (but oddly, usually only my left ankle), and I definitely can’t do everything I used to do. Stairs are not my friend and make me winded if I do them too fast. I’m almost to the point that I can’t pick things up off the floor, but it’s not too bad yet…. and this time I have Abbie to pick things up for me if I really need. Most of the time, I feel like myself, just with a big ol’ belly and more tired.

Food Aversions: Nothing really… although I can’t remember the last time I had a salad.

Food Cravings: Carbs, as usual. Then again, I also crave those not pregnant.

Health/Fitness: I’ve been hovering between the same 3-4 pounds for about a month now and holding steady at about a 24 pound gain. It’s more than I would have liked at this point, but not terrible. Chris says to me almost every day that I’m handling this pregnancy better than my pregnancy with Abbie, so there’s that too. My blood pressure has been fine every time I’ve taken it, so I think the baby aspirin is definitely helping.

Doc Appointments: Next one is on Monday, but all has been good. I had my glucose screening on Monday and it wasn’t nearly as awful as I remembered it being. As of now I haven’t heard back… which they say means you passed. I’m totally still asking for my numbers at my doctor’s appointment on Monday though – I wish they would call you either way! I hate not knowing for sure.

Symptoms: The belly gets bigger by the day. My left ankle swells at the end of the day sometimes, and I get winded easily. Also, so so tired. 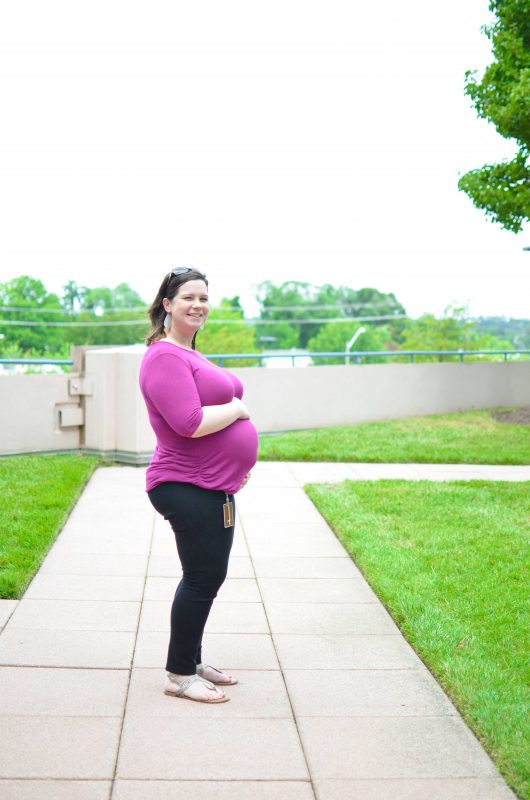 Sleep: Give me ALL the sleep. Seriously. I’m still sleeping pretty well thanks to the Snoogle and getting up only once or twice a night to go to the bathroom. If only there was somewhere for me to nap on my lunch break at work, I’d be all set.

Movement? So much. This little one is a wiggler – I feel her most in the morning after breakfast and late at night before bed. She also likes to stick her butt out like Abbie did, so I’m pretty sure she’s head down at this point – we’ll see if the doctor agrees on Monday.

Maternity Clothes: It’s pretty much all I wear, with the exception of a dress or two that are non-maternity and still work. I had to finally break down and buy some full-panel pants, but they’re weirdly crazy tight in the knees so I need to exchange them for the next size up. I may get 1 or 2 more maternity boxes from Stitch Fix before switching to ask them for postpartum stuff – I am definitely getting near the point that I don’t want to buy any more maternity.

Miss Anything? My clothes. I know, so silly, but I miss wearing all my favorite things. Oh, and being able to put my shoes on easily.

Baby Items Purchased: I did buy baby girl’s bedding this past month, but that’s really it. Our concentration has still been on Abbie’s big girl room, which should be done soon!

Most Unexpected Moment So Far: The glucose test not being as terrible as I remember.

Looking Forward To: Fall. Come on fall, I need a break from the heat!

Abbie: Talks about baby sister a lot, but talks about her like she’s two people – her name and baby sister. She’ll say “baby sister and [baby’s name] need some milk,” etc. We keep telling her they’re the same person, but then she just repeats that. I hope she doesn’t think we’re getting two babies, because she will be so surprised to only get one!