Yep, another post from my lovely husband!  I know you all love these, so here he is!

When something happens that reminds me how much I’ve changed as a man by having a daughter I usually jump to tell Jess about it.  It is in those situations where I get wound up enough that she lets me write a blog post for her.  This one is about women in sports.  More accurately I should say, women AND sports. 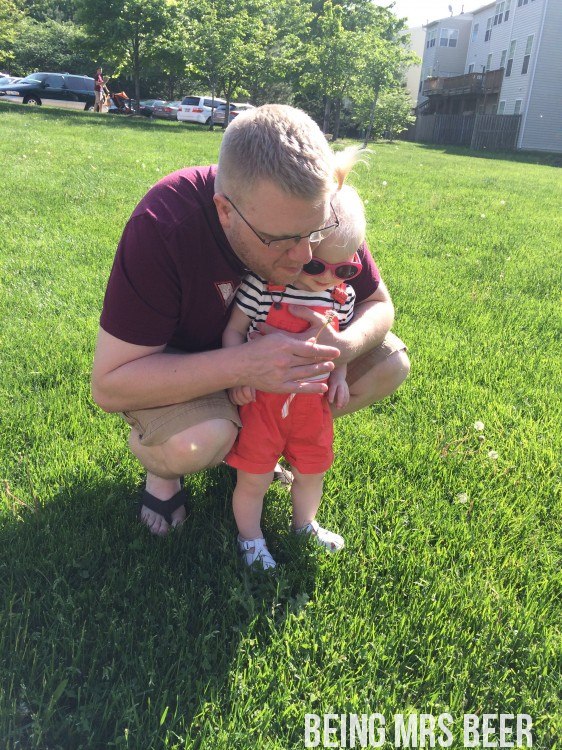 The background here is the NFL-Ray Rice debacle going on right now.  For those who don’t know, Baltimore Ravens running back Ray Rice was caught last year on a Las Vegas hotel camera dragging his unconscious girlfriend (now wife) out of an elevator and sort of just dropping her.  It was later revealed that she was unconscious because he punched her in the face.  This has been kind of flying under the radar until yesterday when NFL commissioner Roger Goodell announced Rice would only be suspended for two games.  To be fair to Rice, he did everything that was asked of him to show contrition, he has never in his career at any level displayed any sort of poor or criminal judgement before, and he did everything the court asked him to do as far as counseling.  The woman in the video is now his wife, so I’m not sure Ray Rice is a terrible human being.

But what has so many, including me, so outraged is the terrible punishment handed down by Goodell.  For comparison:  Michael Vick went to federal prison for his role in a dogfighting ring here in Virginia, Ben Roethlisberger was suspended four games for a civil lawsuit by a woman who claimed he harassed her in a bar, Albert Haynesworth was suspended six games when he stomped on the head of an opponent who’s helmet was off, and most recently Josh Gordon is looking at a year’s ban for smoking pot.  Ray Rice, who knocked a woman unconscious, gets two games?

So here is the meat of my anger.  What has come out since then is a very vocal minority (I hope, at least) of people lead by ESPN commentator Stephen A. Smith who, while dutifully denouncing what Rice did over and over, still makes the case that somehow women need to learn to keep from provoking men who play such a violent game.  For nearly 24 hours on NFL Network they debated the “harshness” of the penalty.  ESPN reporter Adam Schefter wondered if people in the league thought Goodell was too lenient.  Thankfully, there are voices of reason.  Keith Olbermann on his 11pm show completely obliterated the NFL and sports culture in general towards it female athletes.  Michelle Beadle, host of ESPN SportsNation and all around sports nerd, took to Twitter and destroyed Smith and others.

This is no longer about what Ray Rice did, but it is about the priorities and place for women in sports.  And let me freely admit that I was once one of “those guys.”  Ladies, you know what I mean.  I made fun of womens’ sports, rolled my eyes when I heard a women call into a sports radio show, and usually never talked sports around girls.  Though in my defense, I wasn’t the worst.  I have been surrounded in my life by a couple of very sports-savvy women, including my Aunt Fran who is a fanatical, and sharp, Buffalo sports fan.  I played football, basketball, and lacrosse in high school so I sort of know that jock culture and I see it here in the response to this Rice situation.  All through sports, crimes that effect the game are taken more seriously that domestic crimes.  The NFL has a domestic abuse problem from Aaron Hernandez to Greg Hardy to Ray Rice.  It is often swept under the rug and not taken as seriously because, hey, these are big serious guys who play a violent sport and she probably shouldn’t push his buttons so much, right?

Now that I have Abbie and I want her to play sports, I want her to be taken seriously when she does.  Its cliche to say that I’m suddenly interested in women’s sports because I have a daughter now, but its just true.  If she’s in high school, I don’t want someone asking her who kind of boys she likes if she’s doing an interview.  I don’t want her called a man like what Brittany Griner goes through in the WNBA.  I don’t mind beautiful female athletes flaunting what they have (Maria Sharipova and Danica Patrick) because they have chosen to do that, but people still need to respect their game and what they have done as athletes.  The attitude that still permeates around men, women, and sports can be ugly and we’ve seen it rear its head in this Ray Rice debate.  Go check out Michelle Beadle’s Twitter feed and you’ll see what I mean.  I do think we have come a long way, I recognize that, but what has me so angry about the NFL situation is that they seem to put more importance of infractions that affect the way they play the game (PEDs, alcohol, marijuana) that acts of violence against women not done on the football field.  What happens when the next NFL player is pissed at his wife or girlfriend?  “Hey, Ray Rice only got two games so maybe I can take a swing and be alright as long as she stays with me.”  Its insanity.

Again, this isn’t so much about women’s sports versus men’s sports because I actually think women’s sports have come a very long way to be respected.  Women’s soccer, tennis, the WNBA, and even women’s hockey along with all of the Olympic sports do very well.  It is more about the attitude of people in men’s sports towards women in general.  I don’t mean this exactly but I’m almost more mad at Roger Goodell and the NFL than Ray Rice.  What Rice did was horrible, but I think we all believe in forgiveness and as I outlined above except for this incident he has been nothing but an honorable person (that we know of).  It is Goodell and the NFL’s responsibility to show this kind of behavior cannot and will not be tolerated.  Someone like Ray Rice can be rehabilitated, can be made to understand how wrong he was and he should be afforded the chance to prove that he’s sorry.  It is Roger Goodell, the NFL, and the Baltimore Ravens job to say it is unacceptable for any of their players to do anything like that.  At minimum I would have sat him 8 games.  The NFL is on a crusade against players who smoke marijuana, which I am convinced most due because studies have show it helps alleviates stress and symptoms of head trauma, so the Browns’ Josh Gordon is going to probably get suspended a year.  Granted it wasn’t his first bust, but this isn’t about what Gordon did its about his punishment against someone who is basically a wifebeater.

The NFL talks a lot about “protecting the shield.”  This is America’s Game … the NFL calls itself America’s game.  They’ve created that standard that they must live up to.  Nearly every American boy knows what is going on with their favorite players thanks to the internet, and kids are savvy with it nowadays.  They told every single one of the young boys who watches and plays football that as long as its in the offseason, it’s okay to smack a girl around.  Do you want to know why two University of Texas Longhorns players thought they could walk into a girls room several months ago, sexually assault her and think they could get away with it?  Oh, and they took a cell phone picture of her.  The dots, however far away, do connect.  The NFL has a duty to show young men everywhere from Heads Up camps to Pee Wee leagues to the NCAA that this kind of action is not tolerable.  Giving Ray Rice, however genuine his regret is (and I think it is), a simple 2 game suspension is outrageous.  Not just to women, but to men like me who are trying to raise a daughter to be strong.  How can I trust that she can be strong in the real world when institutions that hold so much sway over young men is so willing to let attacks on women go unpunished?