Do You Watch TV with your Spouse?

So, Chris is taking over the blog today. I always love when he writes stuff to share with you guys because you get a glimpse into the man I married and a little bit different take on our lives. So…here’s my husband.

This bizarre story leads me to why I wrote this. We have been married now for four years and really, it hasn’t been difficult. (Aw, thanks babe.) We mesh well together, we have designated roles and responsibilities, and we support each other in what we personally enjoy and in our parenting. The one thing we absolutely cannot agree on is television. 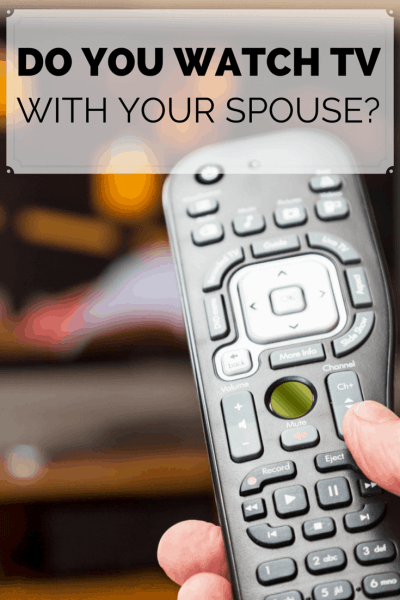 It hit home last Sunday when I sat down at 7pm and for the next four hours watched and reveled in the glory of Wrestlemania 31. Now it might not seem that strange that Jess wasn’t interested in Brock Lesnar against Roman Reigns, but it illustrated something that actually has bothered me for awhile. We share zero common interest in television shows. Okay, that’s not true … we both love Food Network and Cooking Channel. But really, that’s it.

We’ve tried watching shows together and have barely made it through. We both enjoy New Girl and Mindy Project but even that has slowed down. This is the breakdown – I watch pro wrestling, almost anything on Investigation Discovery, Justified, Better Call Saul, The Americans, Banshee, NBA and NHL playoffs, and Nationals games. She watches Real Housewives, Revenge, wedding shows, and random girly movies that we’ve recorded on the DVR. As you can see, there isn’t much overlap. In addition, I love to binge watch shows so even if there is something she might be interested in I get annoyed at how slow she moves. (It’s true – I can barely sit still long enough to watch a one hour show. I can’t even fathom watching multiple episodes in a row.)

We have two televisions so we are able to watch what we want, but should we? We both get home around 6:30 and are on Abbie duty until around 8:30, but then our television habits kick in and I go downstairs and she generally stays upstairs. We aren’t spending time together during the week but we both – especially me – want to watch our shows. I wouldn’t say it causes problems because it doesn’t, but still … sometimes I wish she’d stay downstairs with me even though I know that Justified isn’t for her. Now, since I’m writing this, I must say that I’ve done a better job tolerating her stuff than she has mine, if I can be real here. (This is true, but I cannot handle violence or anything graphic. It literally gives me nightmares, but that’s another story.)

My question is, is this something that might a problem down the road? Should we be trying to find more television shows in common to share? I know a lot of couples find shows on Netflix that they both like and I think that will be my next attempt – perhaps Mad Men and Kimmy Schmidt. It probably bothers me more than her and I definitely watch more television. But the question is … do you go through this? Are television watching habits something married people should monitor and make sure we find something to watch together? Are you fine with your husband watching whatever he wants?

To My Husband on His Birthday

To my Husband, Before we Become a Family of Four

Before We Were Three

PrevPreviousThoughts from Passover
NextFriday! {4.10.15}Next