I don’t really talk about religion much around here. That makes me different from a lot of mommy bloggers I know. So many people proudly proclaim their faith from the moment you land on their homepage. That’s great for them – they know exactly who they are and what they believe in.

The other side of that coin? Well, it honestly makes me not want to talk about mine, and it shouldn’t.

While I’m not a minority in many aspects of my life, I am in my religion. There are many Jewish people in the world, but it isn’t anywhere near as common as Christianity. It’s a bit disheartening to be in the minority all the time. Don’t get me wrong – I’m totally used to it, and I completely respect other peoples’ beliefs… but it makes me afraid sometimes to put mine out there. 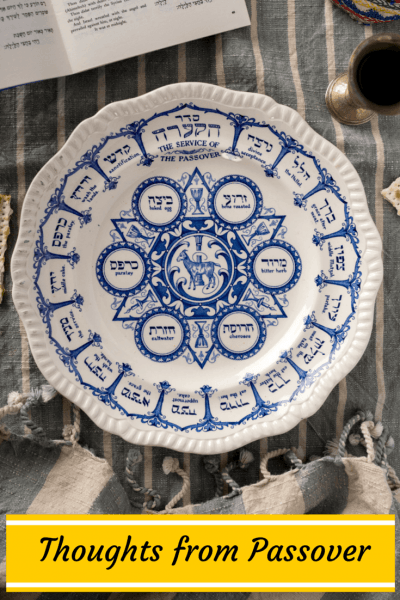 Then Passover comes along. Every year, the Haggadah and the Seder remind me of everything my ancestors went through. Everything we endured – for freedom. Freedom to live our lives and believe what we choose to. Freedom from oppression. Freedom of expression. Just plain freedom. I forget sometimes. It’s not always easy to be Jewish, especially surrounded by non-Jews.

During our trip, my sister and I were able to attend Passover Seder with Hillel at Virginia Tech in their new building. What was a small Jewish student population when I was there is much bigger now. In the short time we were there, we really felt a community around us, one where my sister (should she choose to go to VT), could be free to be herself, to be Jewish. She could strengthen her Jewish identity if she wanted. It struck me as a place she could have that freedom, to just be herself.

Sometimes I feel I don’t have that in my life. Am I the most observant Jew? Not by a long shot. Do I keep Kosher and follow all the rules? No way. But that doesn’t make me any less Jewish. It doesn’t make it less of a part of me.

Being Jewish. It’s not something I see talked about much in the blogosphere, except maybe in a few of us poking fun at ourselves. Maybe, just maybe, it should be. Maybe we need to take the chance to talk about it, to help others understand our world.

One of the things we did at seder was a visual representation of the link we are – the link between our ancestors and our future. I wish I’d taken a photo of it. We had two halves of a chain, and in the middle, there was string tying them together. Individually, the string isn’t strong, but when all of us put our strings on… well, it was just as strong as the chain itself. I’d forgotten that. The more we come together and tell our stories, the stronger we are. I’d forgotten how important it is for our legacies and stories to carry on to our children.

Good thing I have Passover to remind me – remind me to tell my stories, not just to my family, but to others. It’s so important to share that piece of who I am, and who I want to be.

PrevPreviousFresh Start for Spring
NextDo You Watch TV with your Spouse?Next