One day last week, Chris came home ranting and raving about this video and insisting I watch it.  Jenny McCarthy’s in it, so I automatically knew where this was going.  I know a lot of people like her, but I can’t stand Jenny McCarthy for a lot of reasons.  Neither can Chris.  He showed me this clip and continued to rant about it until I told him to write it down.  After all, we don’t often hear from the dads in blogworld, so it’s important to hear their thoughts.  Here he is – but make sure you watch the video for a sec to see what he’s talking about.

This had me going insane today.  I was ranting for almost an hour before Jess just said, “write it out and I’ll post it on my blog.”  First off, single mothers are amazing.  Without a doubt it has to be one of the hardest things to do… and single fatherhood for that matter (a co-worker of mine is a single father).  Because our children come from both of us, it is only natural that they need what both of us have to offer.  Children of single parents are no less likely to be successful, but I’m willing to wager that if they had a choice deep down they would really wish they had two parents.  There is a hole there, no matter how deep its buried.

This gets me to this video of actor Terry Crews talking about the importance of fatherhood and I agree with him 1000%.  The reasoning goes beyond our basic classical definitions of mother and father.  Crews is talking about male influence and what they can do for you, how they help define children and give them confidence.  I’m pretty open-minded, okay with gay marriage and all that, but what Crews is talking about is the importance of a fatherly influence.  There is no replacement for that.  The world is what it is and we adapt as best we can and we support our family and friends in everything they do.  It is beyond clear the importance of fathers and fatherhood.  I know that I give Abbie something that Jess cannot, and vice versa.  I know that as her Daddy she is going to get a different kind of joy and acceptance and confidence from me versus what Jess will give her.  One isn’t worse than another, its just different and equally important. 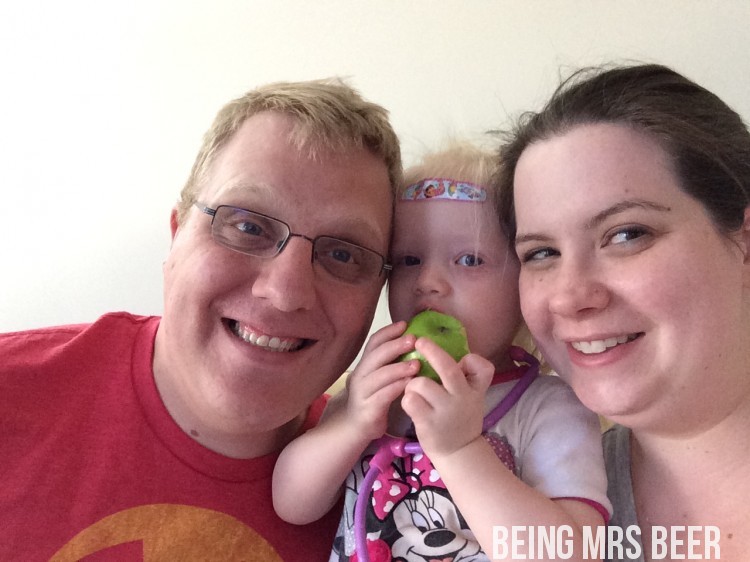 What angers me so much about Jenny McCarthy in this clip (and in general) is her complete dismissal of what Crews is trying to say.  There is definitely a strain of feminism personified by McCarthy that truly believes moms can give their children absolutely everything they need and that fathers aren’t needed.  This is incredibly frustrating to me, knowing that there is already a chronic problem in society of fathers not standing up and taking care of their families.  Women like McCarthy only further the narrative that men can skate away scot-free of their responsibilities to their children.  Crews goes out of his way to try and say this is not about pitting mothers against fathers into a contest about which is more important.  He’s arguing both are vital and McCarthy’s rejection of that drives me crazy … and it really drives me crazy because she’s a woman of significant wealth.  This is an important distinction, and one that one of the other ladies mentioned, because I’m willing to bet most moms who are single mothers don’t necessarily want to be single moms.  They are single moms due to various circumstances, working hard to support their kids, but nobody will ever convince me that a father isn’t necessary.  McCarthy is a millionaire who can actually afford to be a single parent without the hardships the regular single moms out there go through.

I know deep down that if something happened to me tomorrow Abbie would be fine.  Jess would take care of her and our family around us is strong enough to handle it.  I also know that there would be a hole in her soul for the rest of her life because her Dad was gone.  Hearing Jenny McCarthy say, “oh, I’m a single mom and Evan gets everything from me” in response to Crews talking about what Dads give their kids made me crazy.  Nobody is saying Jenny McCarthy or any single mother is a bad mother, but Crews is saying is there are important things children get that only their Dads (or a father figure) can give them.  Jenny McCarthy has used her single-motherhood and claims of curing autism to rebrand herself as a lifestyle/motherhood guru and it’s BS.  I just can’t take the girl from Singled Out seriously, I’m sorry.  This just proves it and to see these views spewed from a show like The View that so popular, it really needs to debunked.  I love being a Dad, Abbie and I have a connection that only we do.  She has one with Jess, but its different.  McCarthy is basically saying she can give her son anything a Dad can and it’s BS.  It might not be as readily apparent to her because she’s so rich she can afford to give him a comfortable lifestyle, but it will manifest itself somewhere, somehow.  I’m going to be who shows how a man is supposed to treat a woman to Abbie by how I treat Jess.  I’m her first impression of what a man should be and Jess could not replace that if I were gone.

Bottom line, Moms and Dads are equal but different.  People who have to raise kids as single parents are saints, but they generally don’t have McCarthy’s wealth to help ease that burden.  Thanks for listening to my ramblings.

I’d love to hear what you guys think of the clip.  Do you agree with Chris?  Do you disagree?  I just ask that you keep any comments cordial and do not attack – I will delete any comments that do.